Nick Rhodes. Simon Le Bon. John Taylor. Roger Taylor. If you haven’t heard of Duran Duran, that’s unusual. At the recent CD signing in New York, every person who stopped on a busy rush hour street to ask why people were on line when everyone else was heading home, had heard of them. People from different countries, different boroughs, different lifestyles. There was the guy who asked what was going on and then said “New Yorkers. That’s what I love about this city. They’ll wait on line for sneakers, CDs, autographs, they’ll do whatever it takes to get what they want.” Not unlike Duran Duran themselves, who over 35 years of determined longevity, have weathered the” slings and arrows of outrageous fortune”, as one of their countrymen said. They had it all. Every video you’ve ever seen since the dawn of the MTV age owes it all to their willingness to act up for the camera and their sense of the visual which they initially saw in their glam rock heroes like David Bowie and Roxy Music.

Oddly enough, the 80s seem to be enjoying a resurgence. Luckily enough, Duran Duran don’t care. Having succeeded beyond anyone’s wildest expectations, 100 million albums sold, sprawling houses, fast cars, and the whole pinup lifestyle, they don’t need to revisit any territory. Maybe that’s what makes their latest offering, Paper Gods, so brilliantly unexpected. It sounds like classic Duran Duran. It also sounds like the newest of the blisteringly new. And by listening to the lyrics of the title track “Paper Gods”, no one could fail to be struck by Simon Le Bon’s ability to analyze the current atmosphere of distrust and disappointment. In fact, there’s a dark side to this album which is startlingly on point. Perhaps especially so, when you consider it comes from a band that for a lot of people are consistently symbolic of a pleasure obsessive culture.

John Taylor, bassist and co-founder of Duran Duran, detailed the wildness of being at the top with an unexpected eye for detail and metaphor in his autobiography, In the Pleasure Groove – Love, Death, and Duran Duran. So it was a real pleasure when Northern Transmissions had a chance to interview the multi-talented musician. Every Duran Duran hit (like the famous bass line in “Rio”) has featured his subtle, deeply forward, riding-the-groove bass playing that owes as much to Motown and dance music as it does to a punk sensibility of taking all the chances. If you’re looking back to the 80s, there’s nowhere better to start than with the musicians who cut a stylish swathe defining the music and video of the time. If you’ve never appreciated the sheer talent and determination it takes to be riding the wave for over 30 years, have a listen to their new album which is a brilliantly addictive musical path weaving through light and dark. And read Taylor’s autobiography to see how crazy the game of being famous can get. Alice Severin had some questions for John Taylor – and he was as just as fierce and passionate about the music as you’d expect.

NT: How are you and where are you?

NT: The new album, Paper Gods, is incredible. And now it’s your first top 10 in the States for 22 years, number 5 in the UK. But you threw out everything you had at the beginning and started again. What was that like, and how did you reach that decision?

JT: We wrote a couple of songs with Mr Hudson, ‘You Kill Me With Silence’ and ‘Paper Gods’ and felt they set a whole new standard for what we were attempting to do.

NT: I went to see you play the other week on the Today show. Watching you all play live, there’s a certain energy and excitement that comes through- like you’re not just enjoying what you are doing, you’re energized by the music, by the interactions between all of you on stage.

NT: One of my favorite songs on the album is Northern Lights. The bass line, the way it plays with keyboard, coupled with the ethereal guitar of John Frusciante – both atmospheric and driving. Why was it a bonus track?

JT: That was a pre-Mr Hudson track but we all loved John’s contribution so we kept it in the race. When it came down to choosing the album running order it just didn’t feel strong enough as a song, nor did it make absolute sense in the album narrative.

NT: I heard somewhere that you write out and decide on the set lists. Do you see yourself as the band leader, a sort of guiding musical and organizational force? Do you feel a certain responsibility?

JT: In my own way I’m driven to make the show as best as I can. I’m a little obsessive regarding running orders, album sequencing, live shows, but that’s just my thing. The great thing about Duran is the amount of territory we cover between us.

NT: You’ve mentioned James Jamerson as an inspiration. And he was one of the greats – as described by Marvin Gaye, who wanted him for What’s Going On – “the incomparable James Jamerson”. Your playing has a lot of that feel – solid, warm, always driving the song but in a very subtle way. When did you start listening to Motown, and what does his playing mean to you?

JT: Funny, I was listening to ‘What’s Going on’ Sunday. The bass playing on that album is a masterclass in inventiveness, subtlety and rhythm. Motown was huge in the U.K – you heard it everywhere. It was inevitable that the sound would get under my skin. 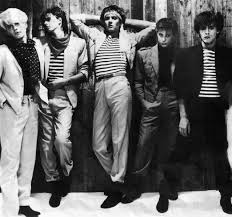 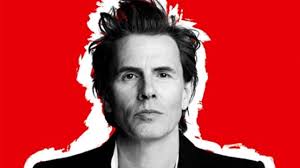 NT: At the GQ ceremony honoring Giorgio Moroder, you nodded in agreement when Nick Rhodes mentioned the band Chicory Tip. Clearly you’ve this wide range of knowledge about bands and musicians and music. How did you start exploring and is thinking about all music interconnected for you?

JT: Gosh that’s a big question. I’m tempted to say, ‘read my book’! You know, if you’re a music person you understand. You just get it, when your schoolmates are into other stuff, like school work…! and you’re the one daydreaming about the new Bowie album or Kanye or whatever music school kids daydream about today. And I never had to stop. I still get to spend my days obsessing about music. Mine or otherwise.

JT: Well again, I talk in detail about that in my book. I do like hunting through record stores, there are great stores in Atlanta and Austin (for example) and L.A. I like used vinyl – I like sleeves that have LIVED. Sometimes I go in with a sense of something particular but these days my tastes are so varied I can almost always find something interesting.

NT: Your autobiography, In the Pleasure Groove, was a really fascinating read. Do you think you’d like to write another book? You always come across as a very verbal person, with a flair for wit and description as well as being able to pick the right moment.

JT: Yeah, maybe…if I can figure out what the message of a second book would be.

NT: You’ve said that you’re competitive. How do you balance that with the creativity, or are those two elements compatible for you?

JT: They absolutely are. To succeed in anything you have to have a sense of competition. Maybe there is a way to succeed without it, but I haven’t gotten there.

NT: Are you thinking at all yet about the next album, or is the focus on the tour? Do you ever write down ideas on the road?

JT: Not one bit. I’m all about Paper Gods.

NT: And – five records that you always go back to.

JT: The White Album – The Beatles

This site uses Akismet to reduce spam. Learn how your comment data is processed.